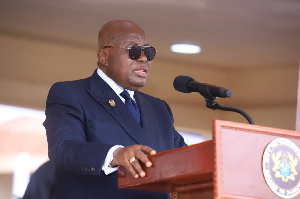 The Member of Parliament for Mpohor Constituency, Mr John Kobina Abbam Aboah Sanie says the President of Ghana, Nana Addo Dankwa Akuffo Addo gave the assurance to hand over peacefully after serving his two terms in his capacity as ECOWAS Chairperson.

The assurance, he said was to tell African Leaders to be law-abiding no matter the position they occupy.

President Akufo Addo, reaffirmed his belief in the principles of democratic accountability, which, he says, constitutes the basis of good governance in Ghana.

Speaking at the 2nd Kofi Annan Peace and Security Forum, held at the Kofi Annan International Peacekeeping Training Centre (KAIPTC), on Wednesday, 8th December 2021, He pledged to continue to respect the tenets of the ECOWAS Protocol on Democracy and Good Governance.

Specifically, the President stated that “I will not make or cause to be made any substantial modification to the electoral laws in the last six months before the next election; and I will respect the two-term limit for the exercise of presidential authority, as stipulated in the Constitution of the Republic of Ghana”.

Continuing, he stressed that “I will not be an impediment to the conduct of free, fair and transparent elections; and I will hand over power to the next elected President on 7 th January 2025.”

President Akufo Addo assured participants at the he will rally his fellow ECOWAS Heads of States to take the pledge, “and support them as they continue to work towards democracy and good governance in their respective countries”.

This got some Ghanaians saying it was obvious that the President will leave so such comments were not really necessary.

But speaking on Atinka TV’s morning show, Ghana Nie with Ekourba Gyasi Simprmu, Mr Aboah Sanie said, “Being the ECOWAS Chair, he was making the statement for them to know that we have to be law abiding citizens whether you are a President or whatever, you are a citizen of the country and the Constitutuin of the country is paramount and so you have to just subject yourself to the rules and laws of the country. “