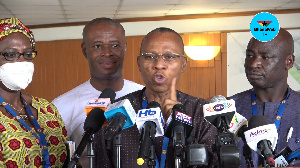 The Member of Parliament for Tuna Kalba, Andrew Dari Chiwitey has accused the government of Nana Addo Dankwa Akufo-Addo and Vice President Mahamudu Bawumia of reneging on a promise to develop water infrastructure.

Vice President Bawumia while in opposition assured that no community in Ghana will have water or toilet facility challenges in two years if he and then-candidate Akufo-Addo assumed power.

But addressing a press conference organised by the Northern Caucus of Parliament on Thursday, December 9, 2021, the MP for Tuna Kalba said the government of President Akufo-Addo has woefully failed in keeping the promise it made to Ghanaians after five years in power.

“You realise that the whole of their five years in power, you can imagine the size of the Northern Region, they did 16 boreholes, and those Boreholes were done in three communities. Bono East, look at the size of Bono East. They did Boreholes in only two communities. As for there, they did 22 boreholes. Ahafo they did in only four constituencies, and the list goes on.

“In the Volta Region, they did only three boreholes for the five years in government. Let’s praise them for doing three in Volta Region. Come to North East Region, five good years in office, where the Vice President comes from, they did zero boreholes. Not a single borehole. Not a single water system,” he stated.

While noting that some non-governmental organisations have over the years engaged in the construction of boreholes in various parts of the country, the government on its part has not been up to the task of providing good drinking water to the citizenry.

“In my constituency, as member of parliament within the five years, I have done over forty boreholes. But thank God I had Global Communities coming to my area, so they have also supported a lot. But the government or Akufo-Addo and Bawumia did not do a single borehole in Sawla Tuna Kalba, a single borehole in the whole of the Savannah Region,” he stated.

He thus demanded that Vice President Bawumia provides answers on the whereabouts of the water facilities he promised when the New Patriotic Party was in opposition.