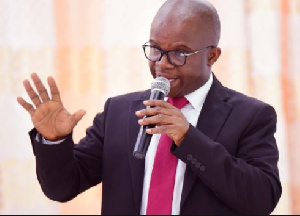 The Nhyiaeso lawmaker is blaming the police for endangering his life

Dr. Amoah is also worried about his reputation

Stephen Amoah, the New Patriotic Party’s Member of Parliament for Nhyiaeso has formally reacted to his recent encounter with the Ghana Police Service.

He was placed on a Police Wanted List following which an arrest warrant was issued for him on Wednesday by a Labadi Circuit Court. He eventually appeared before a court on Thursday, December 9, 2021.

The Police have accused him of multiple traffic offences principal among them driving in the middle of the road, an allegation he has flatly rejected.

In an interview with Joy FM on the Thursday edition of News Night programme, he lamented why the police will put out his car details given that he is a politically exposed person.

He adds that the action of the police has adversely affected his nonangenarian mother and is also taking a hit at his reputation.

“We are politically exposed and I am a political risk factor. Why should the Police put my name alongside my car number in the public domain? What crime have I committed? Do they want to kill me? Now I cannot even be driving around,” he said in the interview.

“And my 90-year-old mother has been crying from yesternight [Wednesday] till today [Thursday].”

Asked what steps he would take to clear his name, he responded: “They should destroy me, destroy my reputation, that’s all. They can even jail or anything. I give it to God.”

The Ghana Police Service in a statement issued on Tuesday, December 7, 2021, said it had mounted an operation around Airport By-Pass to arrest drivers who were not complying with the Road Traffic Regulations.

During the exercise, the Police arrested some drivers including the MP, Dr. Stephen Amoah, who was driving a Toyota Land Cruiser going ahead to quote the registration number of his vehicle.

The MP and other offenders were subsequently processed for court on Wednesday, December 8, 2021, but the MP did not show up. Later, the Police sought a bench warrant for the arrest of MP for Nhyiaeso for failing to appear before the La Magistrate Court.

The Police noted that the MP had been charged with various road traffic offences.

Later on Thursday, December 9, 2021, the Police issued a statement indicating that the MP had turned himself in and pleaded with the Court to revoke the arrest warrant.

Dr. Amoah told Joy FM that, the whole story resulted from a miscommunication on the part of the Police. The legislator in the interview said, he was not informed about having to appear in court.

“The Prosecutor himself came there and informed the court that it was a miscommunication and they pleaded with the court to either withdraw or quash the bench warrant. I was surprised because Evans, I had never been invited to go to the Court, never.

“In fact, even the charge sheet was given to me today [Thursday] in the presence of my lawyers and they were shocked so all those issues, all those hullaballoo, I really didn’t understand what was going on. I was so shocked, In fact, I’m shocked about everything and all that I can say is that because the issue is in court, I can’t say much,” Dr Amoah added.