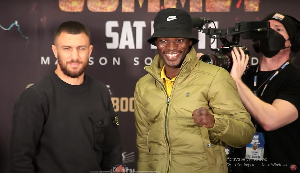 World title shot at stake in Commey vs Lomachenko fight

Ukrainian boxer, Vasiliy Lomachenko is optimistic about utilizing his ‘speed’ against his power-punching opponent Richard Commey for their bout on Saturday, December 11, 2021 at the Madison Square Garden, New York.

After losing their world titles to Teofimo Lopez, both Lomachenko and Commey have a chance of regaining lightweight supremacy should any of them end as champion of the fight.

In an interview with Sky Sports, Lomachenko disclosed that his biggest obstacle is to overcome the tough punches of the Ghanaian. According to him the fans will have a good fight night.

“He has big power and he has reach, experience, so for me it will be a very interesting fight for fans,” Lomachenko told Sky Sports.

“During the fight, you need to be always focusing on your strategy, and always focused on your speed and your reaction,” the former WBO lightweight champion said.

Top Rank’s Bob Arum, the promoter of Lomachenko, is eyeing a win for the Ukrainian to become the mandatory challenger to Kambosos Jr.

“I am optimistic that, at the end of next year, we will have Loma back fighting for the titles,” Bob Arum stated.

Kambosos Jr. became the most enviable lightweight champion in November when he defeated Teofimo Lopez to win four titles in their bout.

Lomachenko has 11 knockouts in 15 victories and has a major threat to ending Commey’s hopes of becoming a two time world champion.