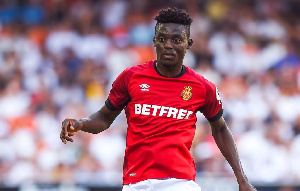 Everton’s interest in Iddrisu Baba is no fluke as the English club are planning to present an offer to Real Mallorca for the Ghana midfielder.

Everton are seriously considering bringing Baba to Merseyside having been impressed with his level of consistency in Spain.

Everton coach Rafa Benitez has okayed the move because he admires Baba is said to have come close to signing him when he was Real Madrid coach.

The Premier League wants to present their offer before January window officially opens.

Ghanasoccernet.com understands that Real Mallorca are only interested in receiving 45 million euros, which is the midfielder’s buyout clause.

Meanwhile, Atletico Madrid are also interested. This time it appears they are serious.

Baba had been tipped to replace Thomas Partey at Atletico Madrid when rumours of the Black Stars deputy captain switching to the Premier League intensified.

Atletico did not make a move after Partey left in October 2020 but have emerged as candidates to sign Baba.

Baba Iddrisu’s style fits that of the Madrid club and are monitoring the situation as the club pushes forward to make a move.

The 25-year-old has made 15 appearances this season and scored one goal.

Iddrisu is expected to make the Black Stars squad for the 2021 Africa Cup of Nations tournament to be hosted in Cameroon.