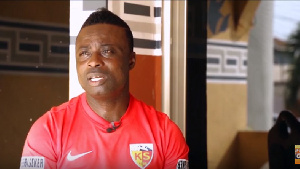 Former Ghana international, Charles Taylor has hailed the Inspector General of Police, George Akuffo Dampare for taking the initiative to arrest hooligans at match venues in the country.

The police on Matchday 6 of the Ghana Premier League arrested team manager, Ernest Amoh and player, Mohammed Amin Adams of Eleven Wonders for attacking a linesman in their game against Accra Lions.

According to the former Hearts of Oak player although the move is commendable, there is the need to expand and allocate a special prison for offenders.

“It is good that the new IGP is trying to fight hooliganism at match venues and has already made some arrests,” Taylor told Angel TV.

He added, “If he’s going to continue like this, I think they first need to expand Nsawam Prison. They need to clear a new site for a new prison for football hooligans alone because even the next Kotoko vs Hearts match alone, they can arrest at least twenty.

“And then the Division One League, they’ll get new batch every weekend. I think they need a new site after Nsawam for this,” Charles Taylor stated.

The two members of Eleven Wonders were granted bail by court on Thursday.