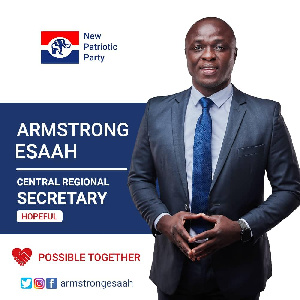 Armstrong Esaah, a leading member of the New Patriotic has firmed up his interest in the Secretary position of the Central Regional branch of the party with an official declaration.

Reports have been rife that Armstrong Esaah, upon advice from some members of the party in the region, was leaning towards running for the position and he has now confirmed those reports with an official declaration of intent.

In a statement, the Corporate Affairs Director of the National Service Scheme said that he has taken up the challenge of contesting the position due to his ‘innate’ desire to help solidify the party’s stand and popularity in the region.

He highlighted his imperious contributions to the growth of the party in the region and espoused reasons why he deserves to be the honour of serving the party.

Armstrong Esaah also gave detailed information about his academic and professional background which positions him above competitors.

“I believe my inclusion as a Regional Executive will offer me the opportunity to strategically deploy my knowledge, experience, skills and resources collaboratively towards winning the next presidential and parliamentary elections in 2024 and also enhance the day to day administration of the party machinery at the regional level,” parts of his statement read.