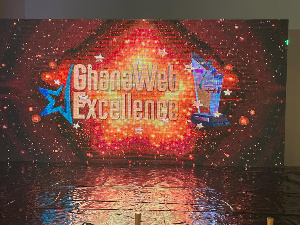 play videoThe grand finale of the GhanaWeb Excellence Awards comes off on December 11, 2021

Voting for GhanaWeb Excellence Award to end at 8pm on Saturday

Over 20 awards to be given out at GhanaWeb Excellence Awards

After several months of various stages of implementing the first-ever website-initiated people choice awards in Ghana, the stage is set to hold the climax ceremony that will see a total of over 20 personalities awarded.

The GhanaWeb Excellence Awards, slated for Saturday, December 11, 2021, will be held in the evening at the Accra City Hotel.

Ahead of that, let us take you a little back on some of the major stages of the awards processes. We begin with the launch of the awards.

On July 1, 2021, GhanaWeb launched the maiden edition of the annual GhanaWeb Excellence Awards, a people’s choice award scheme aimed at acknowledging personalities, groups, and organisations who have contributed immensely to the development of Ghana.

The event saw the unveiling of eighteen (18) categories, plaques, and prizes for prospective winners.

The categories include the GhanaWeb Humanitarian Award, which will recognize a Ghanaian who has been exemplary in promoting human welfare by helping the needy and underprivileged people in Ghana without discrimination.

Speaking at the launch held at AH Hotel on July 1, 2021, Ekow Blankson, Commercial Manager of Advertiser and Publisher Solutions Ghana Limited (ADPU) – managers of AfricaWeb’s subsidiaries – said: “You have known GhanaWeb as a news platform. While we have met your expectations in that regard for over 22 years, we are more than just for news. We are a web portal and therefore offer diverse and multiple solutions to our audience, our known clients, SMEs and starts up. All you need to do is to dream it and leave the actualization to ADPU.

“In the same breath of success, the GhanaWeb Excellence Awards has been born. It is a product that seeks to take Ghanaian awards to apogee with credibility, innovation and class. This is the reason why we are calling all to support this very transparent Awards which is being launched and unveiled today.”

On his part, Nii Akwei Ismail Akwei, Editor-in-Chief of AfricaWeb said “this Awards scheme is audience powered to give our readers and viewers the mandate to decide who has been exemplary in the past year. GhanaWeb is for the people and the people’s voice matters.”

Among the dignitaries who attended the event was the Founder of the All-People’s Congress, and a two-time presidential candidate, Hassan Ayariga who lauded GhanaWeb for the initiative.

A month after nominations for the GhanaWeb Excellence Awards were opened, organisers of the people’s choice awards scheme received close to three hundred nominations for various categories.

“The nominations we have received is far above our expectation for the maiden edition of GhanaWeb Excellence Awards. But should we be surprised? I do not think so. We have the largest audience and since this is an audience-based awards, we are indeed excited about the resplendent participation. A board will look at all these nominations and choose the best 5 for each category. This is definitely going to be an awesome awards event,” Ekow Blankson, Commercial Manager of Advertiser & Publisher Solutions (ADPU) Ghana Ltd, Managers of AfricaWeb’s subsidiaries said.

All you need to know about the GhanaWeb Excellence Awards

The GhanaWeb Excellence Awards is an annual people’s choice award scheme launched to offer GhanaWeb audiences and the general public the opportunity to recognise outstanding Ghanaians who have helped in the development of the country.

This is the first-ever audience-powered award scheme organised by an online media platform in Ghana to celebrate role models and future leaders who would inspire Ghanaian communities and make the country a better place to live in.

The awards are for and by Ghanaians who have worked hard in various fields of national development. It was created by GhanaWeb in 2021 as part of its 22nd-anniversary celebration.

Voting for the GhanaWeb Excellence Awards ends at 8:00pm on Saturday, December 11, 2021, after which presentation of the awards is expected to start.