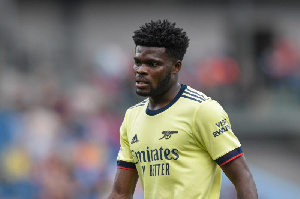 Black Stars midfielder, Thomas Partey has admitted being a pale shadow of himself in a brutal assessment of his time at Premier League club Arsenal.

The 50 million euros signing from Atletico Madrid is presently not in the good books of Arsenal fans because he’s not hit the ground running.

Recently, an English pundit even claimed that Partey was the worst signing of last season, and the midfielder has admitted that he could do better, giving himself a four out of 10 for his showings so far.

“I give myself four [out of 10], because there are moments I can really hurt the other team but there are also moments where I allow myself to lose focus and that’s when everything goes down,” Partey said.

“This is when you realise that you have to get better.

“From the start [of the Manchester United game] I had a couple of moments where I gave two balls away and someone watching on TV from home or in the stadium, it is normal that they see this.

“At the end, I have to be happy with some moments, I have to learn from the bad parts and try to do better. I think they demanded more and personally I know I can give more. I have to keep working and at the end I will get the results.”

“I have to read more of the game. Now I am having a lot of continuous games, it is normal that some games, or some moments in the games, I will be down.”