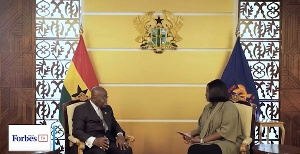 This comes after he was adjudged the 2021 African of the Year by Forbes Africa magazine.

According to the magazine, the Ghanaian President has repositioned the country in the global marketplace as one reliant on its own resources and strengths.

Speaking to CNBC Africa after the unveiling on Friday, December 3, 2021, President Akufo-Addo said, he is overwhelmed by the recognition given him by Forbes Africa.

“For the African version of the magazine to pick on me, I’m very grateful for me,” he told CNBC Africa.

He also mentioned that the African Continental Free Trade Area (AfCFTA) has been on the table for a very long time and its establishment on the continent is an important first step.

“It means we are now talking about the possibility, the rules are now being made as we go along, the training has begun – we began on January 1…considerable amount of the rules and regulations is to be put in place to make it function equitably for the nations continent is now in place and implications are enormous. Suddenly, traders, producers, manufacturers, spotters and the market of 1.2 billion people as the target,” Akufo-Addo told CNBC Africa.

Watch the full interview below