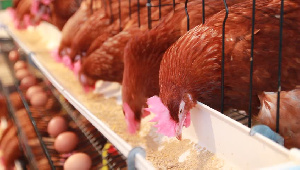 Poultry farmers in the Central Dormaa Municipality of the Bono Region have expressed worry that the rising cost of poultry feed is collapsing their economic activities.

They said the high cost of poultry feed had consequently led to the high demand of maize, thereby, increasing maize prices as well.

In an interview with the Ghana News Agency (GNA) at Dormaa-Ahenkro, the poultry farmers said increment in the poultry feed is as a result of taxes, and appealed to the government for price subsidy.

Mr Dei Kusi, the Chairman of the Dormaa Poultry Farmers Association said the poultry industry in the area Is on the verge of collapse.

Mr Kusi appealed to the government to also encourage poultry and maize farmers to engage in commercial production of maize.

“Many of us have decided to sell our birds and venture into different businesses because we are operating at a loss,” Mr Samuel Sarfo, another poultry farmer at Dormaa-Ahenkro told the GNA, adding, “the cost of production is extremely high”.

Meanwhile, Mr Drissa Quattara, the Dormaa Central Municipal Chief Executive has advised the poultry farmers in the municipality to be patient, as the government worked out modalities to address their concerns.

Mr Quattara said the COVID-19 pandemic had had a huge impact on the global economy, saying, the government was doing everything possible to stabilize the local economy.

He said the Assembly had nursed and distributed 270, 000 cashew seedlings to farmers under the Planting for Export and Rural Development (PERD) programme adding quantities of cocoa seed had also been supplied to cocoa farmers as well.

Under the One-District-One Factory (1D1F), Mr Ouattara said the government has supported private developers to establish a crate factory at Korang for storage of eggs as well as a broiler factory at Nanasuano in the Dormaa East District.

He stressed the government’s commitment to improve road networks, electricity extension to deprived communities as well as water supply to enhance agriculture.

Mr Quattara advised farmers to form groups to enable them to easily access financial assistance and also liaise with Agriculture Extension Agents to be introduced to new technologies to enhance and expand their farm work.

He assured the assembly would ensure equitable distribution of development projects in the municipality, and asked the people to pay their taxes and rates for the assembly to generate the required resources needed for development.