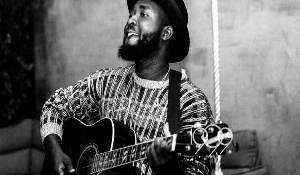 Performing for free at events is often perceived by artists as dreadful and exploitative but Ghanaian singer and songwriter Derrick holds a different opinion and believes offering free performances at events presents more opportunities.

Speaking to Chely Sey during the ‘Ryse N Shyne’ show on Y 97.9 FM, he said, “You have to let people know what you are selling, meaning you are supposed to give them a feel of it and that requires you to play a free gig so they know what you are capable of. When you prove your worth, that is when you will be called later and given an amount to perform for a period.”

He further mentioned that offering free performances were similar to auditions and helped create an appeal for the performer. He went on to advise upcoming musicians to avail themselves and offer free performances at events.

“Free gigs are more of auditions, to create an appeal for your act. So artistes must avail themselves for such gigs before they start to charge event organizers,” he added.

Derrick is a Ghanaian singer and songwriter, he got popular in the entertainment circles after he joined two of Ghana’s most prestigious music reality shows, Vodafone Icons, and MTN hitmaker. He has since released two songs ‘Steal your heart’ and ‘Kpalaga’. He is set to release his debut EP in the coming days.