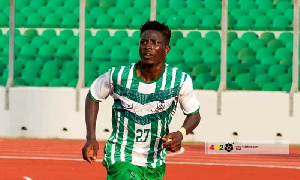 Black Stars have struggled to score goals in matches

Zubeiru Ibrahim scored a hat-trick in matchday 6 of the Ghana Premier League for King Fiasal to hand Asante Kotoko their first defeat of the season.

The Black Stars have been struggling in the goal scoring department with Coach Milovan Rajevac looking to get an antidote before the start of AFCON 2021.

Although the local players have been overlooked when it comes to call up in the Black Stars, Alhaji Grusah believes there are enough quality to beef up the national team.

Alhaji Grusah described Zubeiru Ibrahim as a smart player who has loads of potential .

“Watch his second goal, you will realize he is an intelligent player,” he said in an interview with TV3.