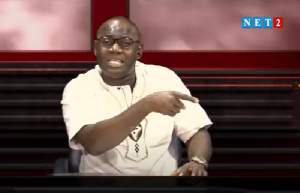 Kweku Annan is a presenter at NET2 TV, a station owned by Kennedy Agyapong

Lawyer: My Lord, that will be difficult, if you look at the trajectory of this case, the defendant has been evading service from day one, it is difficult serving him, that is why we came before you previously for substituted service. But now, he has entered appearance through a lawyer.

Judge: Counsel, you say today is your birthday, if I were you, I will use my birthday to write a letter to the registry and let Clerk together with the court look for him and service him. You don’t know the people you are dealing with.

Lawyer: But my lord, we have already complied with all that.

The above interaction is between Justice Ekow Baiden of the Accra High Court and lawyer Sammy Darko.

The judge is sitting on a case involving Justice Kwaku Annan, the Net 2 TV presenter dragged to court by the former IGP, David Asante-Apeatu for defamatory comments.

The TV station belongs to Assin Central Member of Parliament, Kennedy Agyapong. It shares the same premises as Oman FM, the two entities and others are under the Ken City Media group.

Whiles the issue of service of writs was raised in court earlier this week when lawyer Darko entered a plea for substitutive service for a judgment in default of defence, the journalist is refuting the claim that he is evading service.

Speaking on ‘The Seat Show’ on Wednesday, December 8, 2021, Justice Kwaku Annan slammed lawyer Darko of lying about the matter in court, stressing that he could not be evading service when he is almost always at his known place of work.

The show is notorious for making allegations and hosting people who peddle allegations. Kennedy Agyapong till recently was a regular guest on the show.

“At the time that we were waiting for you to serve us here [referring to his media house] with your summons, you didn’t bring it. For one month, you were not able to serve me with the summons, yet you were all over social media disgracing me.

“Don’t I have a mouth to speak? And you were on social media with the summons ranting. I said I will not speak about the story today, let’s finish with the court process and when we finish, that is when you will see.

“I’m not through with you guys, when we finish that’s where you will see where you will end. Or do you think you can live in this country and control it anyhow, no. it won’t work,” he added.

Brief: The Asante-Apeatu vs. Annan case

The journalist had on the June 16, 2021, edition of his popular talk programme made allegations to the effect that Appeatu was a fence for notorious Ghanaian and Nigerian criminals and harbours the criminals.

He alleged further that he had intelligence about criminal activities and collusion that Asante-Apeatu was engaged in with his ‘pay masters’ who he continued to shield while in office.

In his writ, the former IGP said the defendant’s accusations were figments of this own imagination and were ‘utterly false.’

According to the former IGP, the TV presenter mischievously calculated the allegations in a manner that was to damage his reputation and cause him public disaffection, a Citi News report added.

The plaintiff is therefore seeking the following reliefs:

1. General damages for libel contained in the defendant’s publication of the plaintiff.

2. Aggravated damages arising from libel published by the defendant of the plaintiff