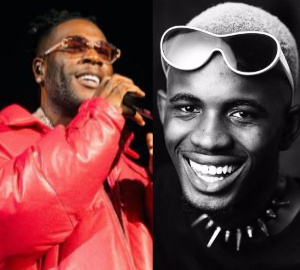 Currently, ‘Second Sermon’ by Black Sherif remix is trending hard at #1 on Twitter with over 17.6k tweets just a few hours after its release.

Today, the spotlight rests on the most recent banger to be dropped into the African Twitter space – ‘Second Sermon’ remix with Grammy award-winning Afrobeats artiste, Burna Boy.

Both, Ghanaians and Nigerians have all agreed that it is the new unequalled powerful tune to be released in that space this year.

Could Burna Boy be taking Black Sherif under his wing, readying him for the most sought after international word in the music industry, globally, the Grammy?

Read some tweets below:

Black sherif really has the platform and potential to take Ghana to the Grammy’s in future. Blacko to the whole wiase ???????????? @blacksherif_ #SecondSermonRemix

See eh @blacksherif_ & @burnaboy just gave us a new madness! #SecondSermonRemix Was a pandemic and BurnaBoy is the new variant,the pandemic about to get crazier! ????????
My guy @Bujutoyourears make I check my $1 $1 susu box buy you new phone ???????????? pic.twitter.com/15uytnSVc5

Ghanaians ankasa we get problem, the thing is not about the song but the kinda mileage n exposure burna boy has placed ???? on black sherif ein brand. #SecondSermonRemix