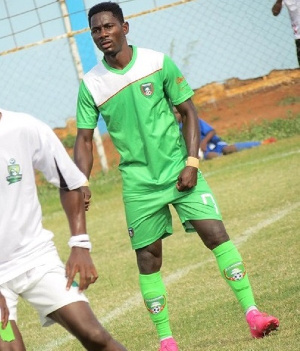 According to Kessben FM, Amin feels frustrated after a mishap with a referee landed him in cells on December 4.

The combative midfielder was remanded in police custody after assaulting a referee during Wonders 1-0 loss to Accra Lions at the Accra Sports Stadium.

He allegedly headbutted assistant referee Jasper Adenyo over an unsatisfied call by the match official.

Amin thought Lions’ goal should have been flagged offside and thus rushed to the assistant line 2 to angrily complain. Things escalated quickly as the club’s team manager Ernest Amo joined the player and allegedly assaulted the referee in the process.

In the end, the Police executed their duty by arresting the two. They were further remanded for two weeks.

Kessben has reported that the Professional Footballers Association of Ghana(PFAG) visited the player on Wednesday, December 8 where the latter disclosed about retiring when his court case is over.

Amin Adams could be calling it a day at the age of 18 years.

Currently, he has been granted bail after his lawyers appeal to grant him bail went through.