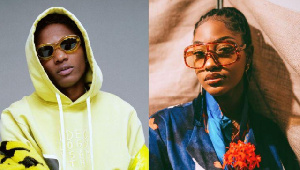 Nigerian singer, Wizkid recently made a guest appearance on Jimmy Fallon’s ‘Tonight’ show where he treated the audience to an amazing time.

The Made in Lagos (MIL) performed his hit single, Essence, and he was joined was his colleague, Tems on stage.

Tems and Wizkid brought their full energy on as they serenaded fans who can’t seem to get enough of the single which has been tagged the summer jam of the year.

But analyzing their performance, a Twitter fan pointed out that there was a safe distance and no connection throughout the performance.

He tagged Wizkid and Tems’ performance as boring.

One can recall that Wizkid and Tems’ performance at the O2 Arena sparked controversies on social media when the former tried to lift the latter.

Watch a video of Wizkid and Tems’s latest performance below:

Official_tope_nuga said: “Lolll. They held their hands once and went close too much but this guy just noticed something and said rubbish.”

Sulymon232 said: “He has been warned lol make he no gbe tems again.”