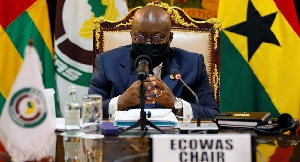 President Akufo-Addo has given the assurance that he will continue to abide by ECOWAS Protocols on Democracy and Good governance.

As current Chairman of ECOWAS, the President has promised to respect the Two Term limit and not make any modifications in Electoral Laws, six months to elections.

Speaking at the Second Edition of the Kofi Annan Peace Forum, the President said, he will not be an impediment to the conduct of free and credible elections in Ghana. He, therefore, charged his colleague West African leaders to do same to promote democracy and peace in the Sub-Region.

“I will not be an impediment to the conduct of free, fair and transparent elections; and I will hand over power to the next elected President on 7th January 2025.”

President Akufo-Addo assured participants at he will rally his fellow ECOWAS Heads of States to take the pledge, “and support them as they continue to work towards democracy and good governance in their respective countries”.

Delivering his speech, the President stated that Ghana is often touted as a beacon of democracy in Africa, and has won plaudits for her democratic credentials.

Though still fraught with challenges, he indicated that Ghanaian democracy has been consolidated with the conduct of eight (8) elections, five (5) presidential transitions, three (3) of which resulted in the peaceful transfer from one political party to another.

“We want to be seen as a positive influence in other African countries who continue to face challenges with democratic consolidation,” he added.