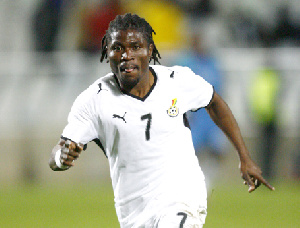 Former Ghana international Laryea Kingston believes the Black Stars will rise to the occasion when the 2022 World Cup qualifying play-offs come around next year.

Milovan Rajevac’s outfit are one of 10 teams still in the running for five available tickets to represent Africa at the global gathering between November and December in Qatar.

Ghana secured qualification for the upcoming third and final round of the qualifiers by emerging top of Group G in the second round of the series, just placing above South Africa.

“One thing I have noticed about Ghana is that when it matters most, that’s when they deliver,” Kingston, who played at the 2008 Africa Cup of Nations, said on Citi TV.

“When they were going to play South Africa in the last game, a lot of people didn’t have belief in the team. We know how to play these types of games, we have been there before and I think we have a solid management that has been there before.

“Milovan Rajevac has taken us to the World Cup before, so he is capable of qualifying us once again.

“I know we are going to meet top teams on the continent in the play-offs but they also have a lot of respect for us and we need to take advantage of that.”

Ghana’s performance during the second round was certainly not the most convincing.

The Black Stars began the series with a hard-fought 1-0 home victory over Ethiopia before losing 1-0 away to South Africa on matchday two, forcing CK Akonnor out as head coach, Rajevac his replacement.

On matchday three, Ghana bounced back to winning ways, beating Ethiopia 3-1 at home, before going on to register a 1-0 away victory in the reverse fixture three days later.

In a two-horse race with South Africa at this point, the Black Stars suffered a setback on matchday five as they were held to a 1-1 draw away by Ethiopia, making their final game against Bafana a must-win.

In the big decider in Cape Coast last month, a first-half Andre Ayew penalty ensured a 1-0 home triumph for the Black Stars, putting them above South Africa only because of a better scoring record.

The draw for the play-offs takes place in January.