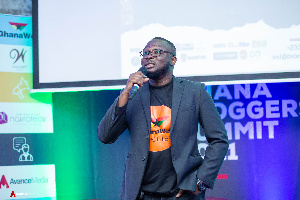 This was part of their benefits from winning the GhanaWeb Reporter contest organized from November 15, this year, to December 4, 2021.

The leading media organization launched this contest to offer a select few bloggers and content creators special pages on GhanaWeb with full access and monetization opportunities.

But then, why were these 10 people the lucky ones?

According to Ismail Akwei, the Editor-In-Chief of AfricaWeb, mother company of GhanaWeb, the most important of all the reasons was the depths of the contents shared in the various submissions made on Facebook, Twitter, Instagram and LinkedIn. He said they were selected based on the relevance of the content, quality and impact.

For instance, for the overall winner of the Contest, Michael Agyapong, his story was about a farming community in the Suhum Municipality called Akitibo, where residents and livestock shared the same source of water.

In the case of the second-placed winner, Joseph Dumolga, he highlights the challenges that non-functioning traffic lights in the Upper East region have on the economic development, linking it with the greening attempts being made by the current government as a way of keeping the vegetation cover of the nation intact.

Third-place Esther Xorlali Kugbey decided to use her piece to showcase the rich culture of her people; the Ewes, and more specifically, the uniqueness of how traditional marriages (engagements) are performed by this tribe.