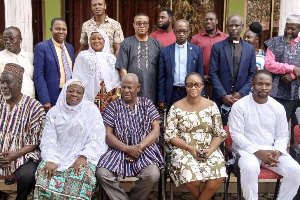 Members of the Bono regional Peace Council after a meeting

The National Peace Council (NPC) has called on Ghanaians in border communities to be vigilant and inform security agencies about people with suspicious characters and strange movements.

Mamaa Afari-Gyan, a Member of the Bono Regional Peace Council, who made the call, expressed concern about the rising threat of violent extremism in the country.

She was speaking at the opening session of stakeholders engagement organized by the Regional Peace Council with support from the Commonwealth Secretariat at Fiapre in the Sunyani West Municipality of the region on Wednesday.

It was attended by religious organisations, youth groups, Muslim and women leaders and civil society organisations drawn from Sampa, a Ghana-Cote D’Ivoire border town in the Jaman North District of the Region.

Violent extremism, Mrs Afari-Gyan noted negatively impacted peace, saying “as a country sharing borders with countries that have experienced violent extremist and terrorist attacks, we are prone to such vulnerabilities”.

“The same factors that drew terrorists to our neighbouring countries such as Burkina Faso and Cote D’Ivoire are already present in Ghana,” she said and expressed concern about the increasing youth population and its attendant problem of unemployment.

Mrs Afari-Gyan said extremist and terrorist groups exploited and capitalize on existing conflicts, including land, chieftaincy, as well as farmer-herder conflicts to recruit people and undertake their operations.

She, therefore, underscored the need for concerted action to combat the effects of violent extremism, which threatened national peace and stability.

“In fact, the type of action needed is a concerted one with all segments of society pooling their energies and resources together.

“As a diverse society such as ours becomes inclusive, we become stronger and better prepared to take action against violent extremism,” she said.

Alhaji Suallah Abdallah Quandah, the Bono Regional Executive Secretary of the Peace Council, took the participants through conflict, conflict management and peace and asked them to contribute their quota towards preserving societal peace.

He said without peace, it would be difficult for the country to develop and advised the participants to go back into their communities and impart the knowledge acquired for the betterment of the nation.

The NPC, Alhaji Quandah, explained was established by an Act of Parliament, 2011 (Act 818) to facilitate and develop mechanisms for conflict prevention, management, resolution and to build sustainable peace in the country.

Some of the mechanisms employed by the Council in conflict prevention, management and peace-building and sustainability, he added mediation, negotiation, public engagement and peace education.