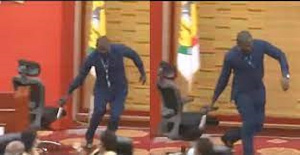 Ernest Norgbey has apologised for his action

He said, he takes full responsibility for his actions

He apologised on Joy FM

Ernest Norgbey, MP, Ashaiman, has regretted his actions of seizing the chair of the Speaker of Parliament when chaos erupted in the Chamber on Wednesday, December 1, 2021.

He told Joy FM on Tuesday, December 7, that the incident that occurred in the Chamber was unfortunate and he apologises for his action.

“There is nothing wrong when you err, you just apologize to the very person you erred against. That is why I said it was an unfortunate incident that happened in the Chamber. I am ever ready to apologize.

“It’s just an unfortunate incident that happened, it occurred during a situation that all of us found ourselves in and so if my actions have offended anybody, I take full responsibility for that and then apologize,” Ernest Norgbey told Evans Mensah.

There was chaos in Parliament after the First Deputy Speaker, Joseph Osei-Owusu gave a ruling which didn’t favour the Minority Caucus.

According to the Minority, it was wrong for the Deputy Speaker who chaired proceedings on Tuesday, November 30, 2021, to count himself as part of the Majority while he assumed the speaker position.

After listening to the arguments for and against the motion, Joe Wise, as he is known popularly ruled that he did no wrong, hence could not accept the proposal from the Minority.

He argued, although he is sitting in for the Speaker, he cannot be described as “the Speaker of Parliament” since he is a Member of Parliament and was only assisting the substantive Speaker, Alban Bagbin, who is currently in Dubai for a medical check-up.

He, then, suspended the House after the ruling because of the confusion that ensued after his decision on Wednesday.

Amid the heckling, shouting and shoving from members of both sides, the Ashaiman MP walked straight to the place where the Speaker sits and dragged the chair towards the Minority section of the House.

Some Marshals of Parliament had to intervene to restore the chair to its original position.

Defending his actions, the MP told TV3 that he did nothing wrong relocating the seat of the Speaker of Parliament.

“I don’t agree with the view that touching the Speaker’s seat, is sacrilegious. The Speaker was not on the seat when I touched it. So many people touch the Speaker’s seat. I can also touch it. When I touch it, what happens? And no, my action did not attract the Marshals. They were already there. They were already positioned around the mace and the seat. No one intended to carry the seat outside the chamber,” Ernest Norgbey said.