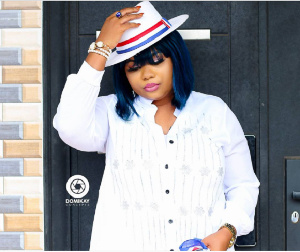 Evangelist Aba Annan, the mother of award-winning gospel artiste Gifty Adorye broke down into uncontrollable tears during an interview while recounting he experience in her second marriage.

Evangelist Annan who is famed in the Ghanaian movie industry speaking in an interview with Oman Channel, disclosed that she left her second marriage with 2 children in addition to her six children after she was subjected to severe emotional abuse by her husband.

“If you talk of a man abusing his wife in a marriage, I’ve been through it and I have promised myself that I will make a movie out of my own story. The things I’ve been through right here in Tema, I bet people never though this is how far God will bless me,” she stated while shedding wild tears.

She disclosed that she married her second husband, one Mr Koomson after the death of her first husband. She said while she was with Mr Koomson who was well to do, her husband did not take care of her as a wife but rather kept a good impression of himself in the public causing outsiders to think she was well catered for.

“If you are attending a church and your husband is the one giving huge offering, he is the one they know. When he is doing something bad no one cares. Nobody cared if he was doing anything bad because he will be named as chairman for church events and others,” she said.

Evangelist Annan disclosed that her abusive husband once told her he was going to maltreat her until she leaves the marriage and that become her cue to leave.

She thus urged her fellow women to leave when they find out they are in an abusive relationship.

“I wept that night until morning came, and I packed my things and left because of what he said to me. That’s is why I will entreat the women to leave if the abuse is too much. Recently it has been reported that a man murdered his girlfriend and kept her butchered body in a fridge. When you see it run away, don’t stay and die,” she stated.