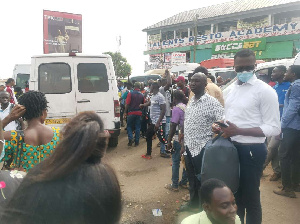 Dr. Louis Aseidu, a Statistician and Senior Statistics lecturer at the University of Ghana, Legon has stressed that ordinary, Ghanaians would be relieved should they see their taxes put to work.

He weighed in on the recent controversies around the introduction of new taxes in the 2022 budget, particularly the electronic levy tax (e-levy).

Mr. Aseidu believes that the introduction of the e-levy was early and as such could be problematic to the government’s economic digitalization cause. He suggested, the rate of 1.75 % tax on the e-levy was excessive and shared, a reduction to 1% could be suitable.

During an interview with Samuel Eshun on the Happy Morning Show, he said, “The digital drive we’ve all subscribed to is obviously a good avenue to tax Ghanaians and realize some revenues for the development of the nation, which is perfect. The fact is we’re in the early days yet in pushing the digitization agenda, and people have not even come to full terms with the need for the nation to go the digital way. Therefore if it comes at this early moment with taxes, then it implies that, all these things were done to put a lot of people in the tax net to tax them.

The taxing might not be the problem, but what exactly is done with the revenues realized on these taxes. Immediately people have to see a better change, road networks, hospitals and more infrastructure development. Some of these taxes are early days yet and I urge them to slow down a little. I would suggest a 1% rate on the e-levy which is ideal. We need to start small and see how it works but 1.75% is too high. At an early day policy, start small, do a pretest and see the reactions from Ghanaians. The money we also realize from these taxes, we should let people understand what they’re used for and let them feel the impact in their lives. There has been improvements in health services, quality education, good road networks and improvements in their lives. When these things are done, you wouldn’t have to push further. Anytime taxes are increased, Ghanaians won’t feel reluctant and willing to contribute.”

Speaking on the recent sit down strike by the commercial drivers in an interview with Samuel Eshun on the Happy Morning Show, he added, “Everybody in the country is contributing their quota to aid in the development of the country. We don’t appreciate the effect of the services on the individual until it is withdrawn. Sometimes, harsh decisions like the strike have to go on and it’s very difficult to take. What they did yesterday with the blockades and redrawing their services, we felt the impact. We need to review and restructure our policies well. We need to make the ordinary Ghanaian who is contributing so much to the economy feel a little bit relieved.”

The Minister of Finance, Ken Ofori Atta, in a press conference on Tuesday December 7, indicated that, a reduction in the rate of the e-levy would be considered, while government has also directed Goil to reduce its fuel prices.