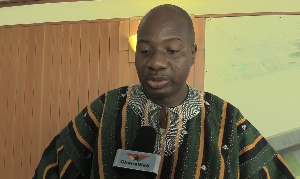 Bawku Central lawmaker, Mahama Ayariga has dismissed assertions that events unfolding in Parliament regarding the 2022 budget statement are likely to give rise to coup plotters to take over the country.

In his view, what is happening in parliament is healthy for Ghana’s democracy because it sends a signal to the governed that the institutions are checking each other.

“What is happening shows that our democracy is working. I hear people say that what we are doing, we will invite military or adventurists but that is not the case.

“When people lose confidence in democratic institutions or the ability to check one another, the Executive , Judiciary and legislature are three arms , they check each other. When people lose confidence in the ability of the three arms from checking each and begin to think that they collude to promote their selfish interest that is when actually, adventurist would have an excuse to move in and they will get population support.

“If there is a dispute and they go to the court they must feel that the courts are determining the matters impartially If that happens, no adventurer will even venture and even if somebody tries the population will resist because they are confidence in the institutions.”

At least, he said, people are allowed to speak their mind and also disagree on issues but still live in harmony with one another, a situation he said helps the democracy.

He was speaking regarding the pandemonium that occurred in Parliament during a debate on the 2022 budget statement, at a ceremony to welcome some Austrian legislators to Ghana’s Parliament, on Thursday December 2.

The Independent Lawmaker for Fomena said “You might have heard, we are going through the process of approving the budget for the ensuing year which is 2022 calendar year from January 1st to 31st December 2022.

“Ghana’s Parliament has equal stands in terms of the two main parties so the approving the debate has become an issue. You might have probably heard what is going, it is all part of the democracy. We hope we will co-operate and get the budget through so that we will be able to carry on government business next year.

Some lawmakers have indicated that Ghana’s democracy is currently at the crossroads following the developments that characterized the approval of the budget.

For instance, Member of Parliament of North Tongu, Samuel Okudzeto Ablakwa said in a tweet that “this is the time for leadership – a listening, caring, sensitive and bridge-building that takes the country away from the edge of the precipice.”

There was chaos in Parliament on Wednesday December 1 following the approval of the 2022 budget statement.

On that day, there was a heated debate between the Majority and Minority lawmakers in Parliament over the approval of the 2022 budget statement by Parliament without the Minority.

The Minority had moved a motion to set aside the approval of the budget.

Their Leader, Haruna Iddrisu in moving a motion to overturn the approval said 137 lawmakers of the Majority could not have taken a decision.

He said they don’t consider Deputy Speaker Joseph Osei Wusu (Joewise) who deliberated over proceedings yesterday, as Member of Parliament at the time he was sitting in as speaker hence that leaves the number present at 137.

His motion was supported by Bawku Central MP, Mahama Ayariga who pleaded with the First Deputy Speaker to set aside the approval.

However, in a sharp rebuttal, Damongo MP and Minister for Lands and Natural Resources, Samuel Abu Jinapor, quoting from the Constitution and the Standing Orders of Parliament defended and justified the approval of the budget.

“Mr Speaker, the approval of the budget was legal, it was appropriate, it was constitutional. You needed half of the members to take the decision and that decision is binding and standing,” Abu Jinapor said amidst cheers from his colleagues.

It is recalled that immediately after the approval of the budget on Tuesday, Haruna Iddrisu said that the Majority did not have the numbers to enable them approve the 2022 budget statement.

He said at a press conference in Parliament that as of the time the Majority were taking the decision to approve the budget, they were 137 and not 138.

“The precedent they are setting will haunt them in the future. At the time that they were taking the decision the house was not 137.”

They further rejected the assurance by the Finance Ken Ofori-Atta that their concerns in the 2022 budget would be addressed at the committee level.

Haruna Iddrisu said that they wanted their concerns captured in the original budget statement, not to be discussed at the committees’ sittings.

“If you are acknowledging and admitting that there were concessions, let it reflect in the statement” and not a meeting at the committee level.

He further stated that the Minority will oppose to the E-levy proposal in its current any day and anytime.

“We don’t support the E-levy in its current. Our point is to revise it to take care of the ordinary people.”