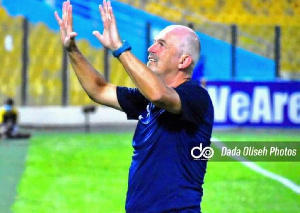 Kraft won 2 of his 6 matches in the GPL

The club announced the manager’s departure via their social media handle. In the post, they stated that Kraft will continue to assist the team as and when needed.

Kraft was appointed in 2019 while the team was in the country’s second-tier division. Under his watch, the team secured a first top-flight qualification, topping the National Division One Zone three.

However, a poor run of results in the Premiership has led to his axing. He managed 6 games, won 2, lost 3 and drew 1.

The expatriate leaves Accra Lions on the 11th position on the Ghana Premier League table.

Following his sacking, the Lions have confirmed that assistant coach, James Francis will take over as interim manager.

“Rainer Kraft had a very successful spell in his two years as Head Coach of ALFC that was crowned with winning the Division One Championship and gaining the Ghana Premier League promotion this year. We are very grateful for everything he has done to develop our club forward and wish him well for the future.” he told the club’s media.

The Club can today announce that Rainer Kraft has left his role as Head Coach at Accra Lions. Mr. Kraft has been relieved from his duties to return to Germany for personal reasons. He will continue to assist the club as a Consultant. #yennyinaadea #accralions #GPL pic.twitter.com/JH4yzhtVz0