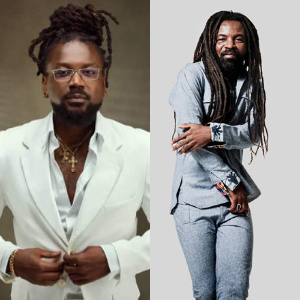 Dancehall artiste, Samini, has stated he was the only artiste to feature on Rocky Dawuni’s first Grammy-nominated album in 2015.

The album titled ‘Branches of the Same Tree’ got nominated for the Best Reggae Album category in 2015.

Samini made this assertion in the just-ended 2021 edition of ‘Rhythms On Da Runway’ held at the Grand Arena of the Accra International Conference Centre (AICC) on December 4, 2021.

It was celebrated under the theme, “The Masquerade, to promote the wearing of face masks for the prevention of the spread of COVID-19.”

Rocky’s music artistry was acknowledged and commended as Samini brought on stage the Grammy nominee.

He applauded him for getting a nomination for the second time also paid tribute to him at the event.

He also called on Ghanaians to pray and support Grammy nominee, Rocky Dawuni to win the award.