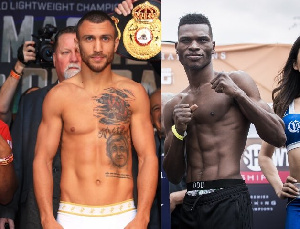 Richard Commey has a bout against Lomachenko

The Ghanaian pugilist comes up against the pound-for-pound Vasiliy Lomachenko at Madison Square Garden on Saturday, December 11.

A win for Commey will inch him closer to another world title shot after losing his International Boxing Federation [IBF] World Light Title to Teofimo Lopez in 2019.

Commey who has been in the gym with his trainers since his victory against Jackson Marinez in February believes he has devised a plan to trap the Ukrainian on Saturday.

“My trainer Andre Rozier and Gary Stark have been working hard with me,” Commey told The Ring.

He added, “They believe in me and I will take that belief into the ring with me come December 11th.”

“[I have to bring] my A-game. As long as I stay focused and listen to my corner, I feel I have all the tools to be victorious on the night,” the Ghanaian boxer said.