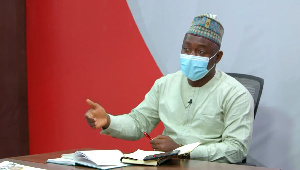 MP for Tamale South Alhassan Suhuyini says the e-levy should be withdrawn entirely. He wants government to cut down on wasteful spending instead of imposing new levies on Ghanaians.

According to him, the probability of government misappropriating the funds that will be generated through the e-levy.

Speaking in an interview on JoyNews, he stated that “at this stage, nothing, absolutely nothing will make us accept the e-levy. I don’t think that they can convince anybody already going through a lot of hardship and experiencing the waste that this government is engaged in to agree to any percentage of e-levy, at this stage it’s going to be difficult.”

He further stated that the levy should be entirely taken out of the budget.

“That is why I believe that the right thing for the Finance Minister to do is to withdraw it from the budget and engage in extensive consultations. If government cuts the waste, the luxury that they are swimming in, chartering flights engaging in trips that are meaningless to us at very huge costs if government prioritize better, just cut the waste in the system and you will be saving a lot.”

Minority in parliament had earlier rejected the 2022 budget over concerns of the imposition of the e-levy.

The Finance Minister however said these concerns have been noted adding that the e-levy is still pegged at 1.75%.