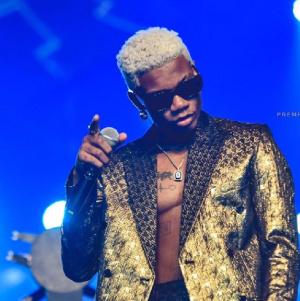 KiDi surprised by a female on stage

An unknown lady grabbed attention over the weekend when she jumped on stage to bend for KiDi when he performed his song ‘Touch it’ during the Rhythms On Da Runway event.

The Afrobeat singer, songwriter and producer was equally taken aback by the act at the Rhythms On Da Runway event dubbed ‘The Masquerade,’ held at the Accra International Conference Centre (AICC).

The incident happened midway through his performance at the 9th ‘Rhythms on Da Runway’ show. The female fan jumped on stage rubbing her buttocks against KiDi’s crotch. The artiste paused and made a dramatic reverse as though he was about to trip.

The exciting event put together by media personality KOD had other astute performers such as Pat Thomas who was honoured with a special ‘Black Star Honour’ award alongside Nigerian actor and lawyer, Richard Eyimofe Evans Mofe-Damijo, aka RMD for their contribution to the creative arts industry.