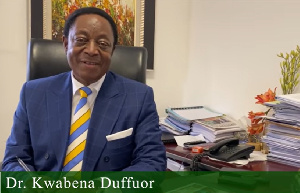 Dr. Kwabena Duffuor, a former Bank of Ghana governor and former Finance Minister has suggested that over the four years that he served as a cabinet minister, he did not take salary and allowances.

The celebrated businessman, who is also in the race to become flagbearer of the National Democratic Congress, NDC; made the disclosure in a wide-ranging interview on Accra-based GHOne TV – a channel he partly owns.

“Who will serve a country for four years and will not accept anything: no salary, no allowances, no ex gratia?” he asked while responding to allegations that he was a mole in the NDC.

He described the claims as “wicked” and “unfair” especially as it pointed to him doing so for supposed financial reasons.

“Those claims are just wicked and I pray that those people will put their thinking caps on. It is very unfair. Why would I be a mole when money is not my problem?” he wondered.

He recently stated in a series on interviews that he was interested in leading the NDC as presidential flagbearer. That decision effectively means he will likely have to contest former President John Dramani Mahama when the party meets to elect its candidate for the 2024 elections.

Duffuor served as Central Bank governor under the Jerry John Rawlings era and was appointed Finance Minister under the John Evans Atta Mills administration. He left frontline politics when John Mahama became president in 2016 and went to concentrate on his businesses.

In videos released months back, Duffuor embarks on the “Ghanaian Dream” campaign that involves canvassing for more supporters for the NDC.

He says in one of the videos: “What the NDC means to me is that everyone in this country will have an opportunity to achieve the Ghanaian dream.

“I was lucky to be allowed to dream of a better life and make it happen and I want every young person in Ghana to have a chance to achieve the Ghanaian dream.

“A real opportunity at making something of themselves, so that they can help build, run and better this great country of ours. We owe this to our children and indeed we owe it to ourselves too.”