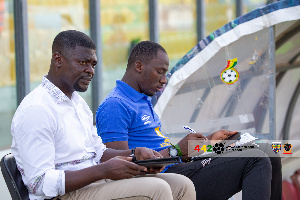 Hearts of Oak are bottom place in the league

The Okwawu United CEO has said that Boadu should not be blamed for the club’s recent poor form after imposing decisions on the manager.

Hearts of Oak are suffering a debacle five months after winning the Ghana Premier League and the domestic league cup.

In the new season, the Rainbow lads are without a win and as a result occupy the rock bottom of the table with just 3 points after four matches.

However, Anim Addo believes the coach that won the team the double last season should not be blamed.

“What has he done? Boadu is not happy. With the coach, you(Hearts management) know what you are doing. Imposing players on him and other things. Boadu is my friend, he is my coach so we speak often. He is not happy. Now the supporters are claiming he is not good.” he told Asempa FM.