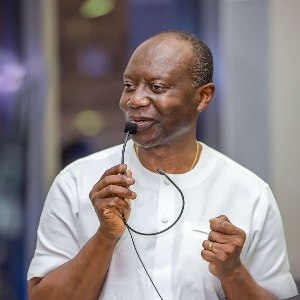 The debate on whether or not the e-levy placed on all electronic transactions and remittances will be reviewed downwards to help lessen the burden of Ghanaians, especially the vulnerable in society is still on.

As the Minority in Parliament has declared their stance to reject the 1.75% e-levy, the Majority on the other hand are in favour of it.

They [Majority] opine that the revenues generated from the e-levy will be used to embark on developmental projects such as fixing deplorable roads, creating job creations, among others.

But the Minority, who share a contrary view says the 2022 budget will impose hardship on Ghanaians when approved.

Appearing on Peace FM Kokrokro morning show on Tuesday, December 7, 2021, and monitored by GhanaWeb, host of the show, Kwami Sefa Kayi asked the finance minister that “What if the minority remains adamant on the e-levy?”

He said, “That’s why God gave us [Majority] one more vote than them. They all move to philosophically accept it, that’s a good way to move forward.”

Ken Ofori-Atta noted that the proposed e-levy in the 2022 budget remains 1.75% and not 1.5% as some members of parliament.

“On the matter of the E-levy, having regard to its serious fiscal implications, we will continue our consultations with the Minority Caucus in Parliament and other relevant stakeholders, with a view to achieving consensus and reverting to the House in the shortest possible time,” he said.