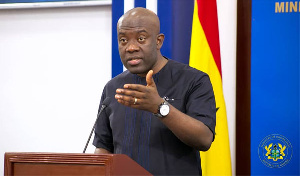 Government to generate revenue from e-levy

Information Minister, Kojo Oppong Nkrumah, has said the probability of Ghana running back to the International Monetary Fund (IMF) for financial assistance is high if the proposed e-levy on all electronic transactions and remittances is rejected.

According to him, the e-levy has been programmed in a way to generate about 6.7 billion dollars as revenue for the country.

Speaking on CitiTV Point of View programme on Friday, December 3 and monitored by GhanaWeb, the Information Minister said, the more people talk ‘evil’ about the e-levy, the more it sends the wrong signals to investors on the global market.

He said, “this e-levy has been programmed to bring us about a billion dollars. About 6.7 or so billion dollars. It is equivalent to what if you don’t go for this e-levy, we will end up going to IMF… We have found a revenue measure which we believe will do the trick for us. Now, if you come and stand on the floor and begin litigating – okay I’ll move it to this, I’ll move it to that, you begin to send signals unto the global capital market of uncertainty,” he added.

“Even present investors in your bonds will begin to ask themselves whether your fiscal measures are credible, whether they should continue staying in your bonds or begin to withdraw which will have an effect [on us],” he stated.

It would be recalled that on November 17, 2021, Finance Minister, Ken Ofori-Atta, during the 2022 budget reading in parliament, announced the introduction of 1.75% tax on all electronic transactions.

According to him, this new directive forms part of strategies to widen the country’s tax net.

He added that the e-levy will enhance financial inclusion and protect the vulnerable in the country.