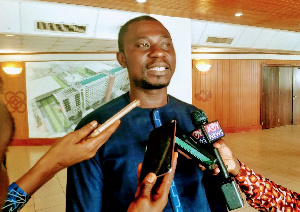 Member of Parliament for Ashaiman, Ernest Henry Norgbey, has been accused by a fellow MP of being the hatchet man in the Minority side.

According to Alexander Kwamina Afenyo Markin, MP for Effutu and Deputy Majority Leader, whenever the Minority wants to execute any nonsense, they deploy the Ashaiman lawmaker to do so.

Afenyo Markin’s disclosed over the weekend that chaotic near-violent scenes on the floor of Parliament did not happen in the moment but that they were carefully planned by members on the Minority side.

He alleged that the MP for Ashaiman had been positioned to lead an assault on First Deputy Speaker Joseph Osei-Owusu, popularly referred to as Joe Wise on December 1, after he suspended sitting when noise broke out after his ruling on a motion by the minority.

Afenyo who said he sometimes feared for his life in the chamber said the Minority would have assaulted the sit-in Speaker had he adjourned sitting. When he did not, they planned to snatch the mace and Speaker’s chair – all of which was foiled by the Marshalls.

“The next strategy was to get the mace out, so Marshall got wind of it and went to protect the mace. They were supposed to take the chair, eventually, the Ashaiman MP, remember he did the same thing to Ursula Owusu. He has been stationed to do that, he is the hatchet man.

“When there is nonsense, he will be nominated to execute the nonsense. Sometimes I sit in the chamber afraid of my own life, I fear for my life because smallest thing, we are debating then you threaten somebody, I will beat you. I will beat you,” he quizzed.

Speaker Joe Wise’s rejection of a Minority motion seeking to reverse a budget approval the day before plus his pronouncement that he was not a Speaker but the First Deputy Speaker led to chaos on the floor of parliament, eventually leading to Ashaiman MP, Ernest Henry Norgbey whisking away the Speaker’s chair.

Commenting after the incident, the MP justified his actions stating that “we have to preserve the seat for Mr. Speaker to come.

“I didn’t just take the Speaker’s chair. I did that on the notion and the ruling of the speaker [of Honourable Joe Osei Owusu] who is the deputy speaker. He said a deputy speaker is not a speaker so he’s not the Speaker.

But I was of the view that if you are not the speaker, why then do you overturn the ruling of a Speaker. That is my point. And if you are not a speaker, why are you sitting in that chair? Then the best thing is that we have to preserve the seat for Mr. Speaker to come.

“[I wasn’t going to attack him] That time he had left. I won’t have attacked him…nobody would have attacked anybody” he told Joy News’ parliamentary correspondent Kwesi Parker Wilson.