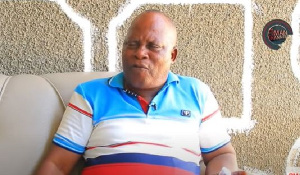 The one-time famous Jesus Onetouch speaking in an interview with Oman Channel disclosed that as a descendant Okemfo Anokye, he has been blessed with the knowledge of traditional medicine.

But according to him the attribution of traditional herbal medicine knowledge to smaller gods is a misconception of what the smaller gods are capable of.

He believes that the power to heal and perform miracles only belongs to God and the attribution of such powers to smaller gods including river gods is a mistake that people make.

“The power that was used to command the golden stool was from God and the works of Okomfo Anonkye and the others should have been used to lift the name of God. It is only God who says all wealth belongs to him. If you truly believe in the power of the fetish priest let me ask you this; we all know the river Birim and other river bodies supposedly inhibited by gods. When they are used to curse poor people, they die. But how come it is not able to kill the Chinese people who come from their country to muddy the river bodies with machines in the name of gold mining?” he questioned.

He said this does not make him believe in lesser gods adding that “they have destroyed all the water bodies with galamsey and it has affected the entire nation but they have not died. So if you get up and say there is truly a god then you have a small mind.”