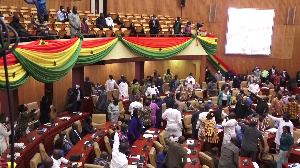 There were chaotic scenes in Parliament on December 1, 2021

Habib Iddrisu, New Patriotic Party (NPP) Member of Parliament for Tolon and Deputy Majority Chief Whip has voiced apology on behalf of MPs for chaotic events that took place in the House the past week.

According to him, as a leader of the House, the events of Wednesday, December 1, 2021, did not reflect what Parliament must do by way of exchanging, conversations and debating.

“On behalf of the leadership of the Majority, we are equally not happy and actually sorry to the Ghanaian public for the unforeseen circumstances that is actually happening in the house. We know for sure, Parliaments everywhere is about expression… exchanging, conversations, debating.

“That is the essence of Parliamentary work, but for the fact that it is getting a bit physical, violent, that is the unfortunate part of the whole conversation but we in the Majority we are working hard to make sure that such things doesn’t happen anymore,” he added.

He stressed that events on the day marred the beauty of democracy and parliamentary business that in his view were rather unfortunate.

“If it happened that way, it mars the beauty of democracy and Parliamentary business in Ghana and is rather unfortunate that this is happening… moving forward, things are going to be okay and normal for us to be able to coexist and to do our Parliamentary business … to make laws and not get physical,” he added.

The MP spoke on Saturday, December 4, 2021 on the Key Points programme on TV3.

The eighth Parliament whose tenure started on January 7, 2021, has 275 MPs with the two representative parties – the ruling New Patriotic Party and National Democratic Congress – having 137 MPs apiece.

The sole independent lawmaker is MP for Fomena who chose to work with the NPP hence giving the NPP 138 MPs. Speaker Alban Bagbin pronounced earlier this year that that development made the NPP, the Majority Group not a Majority party.