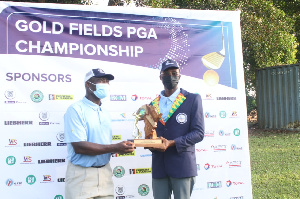 Vincent Torgah has won the 2021 Gold Fields PGA Championship for the third time after scoring a record -20 over four days.

The center of the World Golf Club player started brilliantly well from the first day playing -9 to set Damang Course record in the first round.

He continues his blistering performance throughout the reaming rounds with -4, level par, and -7 to wrap up on a total Standard Scratch Score of 268 over four days to win the enviable trophy.

Last year’s winner Luck Ayisah came second following an impressive turnaround from round three as he recorded +1, -1 -1, and -2 with a total score of 285.

Emos Koblah piled up much pressure on Vincent Torgah in the initial stages of the competition but that was not enough to knock Torgah off the leader board slipping further to finish third with -3, -1, +3, and +1 totaling 290.

Owusu Bonsu Maxwell of Royay Golf Club and Chibvuri Biggie completed the fourth and fifth finishing with 290 and 293 respectively.

TORGAH: ‘It wasn’t easy but I kept my tempo trying to stay focused throughout the tournament. My mental psyche helped me a lot because I actually prepared, worked hard and my friends also helped me a lot to keep going.

‘My game confidence is back and I also played and won a couple of tournaments across African within the year so I must say the year has been very good for me.’’

When ask about his plans for next year, he said:

‘I have alot of plans next year and won’t stay in Ghana for long because I will be traveling to Europe and the USA to play some international qualifiers and tournaments so I need everyone’s support.’’

‘Just Keep your head down keep working, if you want to maintain that Tiger Woods status it doesn’t come easy you have to keep working hard not only on the course but off the course as well.

‘For the rest of you, I’m urging all of you to challenge Vincent Torgah in the next championship next year. Vincent [Torgah] I also want you to say no way and no challenger. Wish you all the best EVP advise.’

Record setter Amponsah Quining who became the first golfer to break the ‘Hole-in-One’ record on hole 17 finished seventh with 296 gross.

‘I had this hole in one in mind for about three years ago and I’ve been trying to achieve it and it has happened for me today so my dreams has come through.

‘I just hit the ball to the green and luckily it went straight into the hole.’’

In the Seniors category, Robert K. Degbe finished first with a total score of 228, 235 put Akwasi Prempeh second as James Larry and Dawuda Mahama were joint third 237 above Charles Chichi who completed the top five with 242.

General Manager for Damang Gold Fields, Mr. Michiel Van Der Merwe and his team were glad to host yet another successful event and promise to work hard to get in the foreign professionals next year.