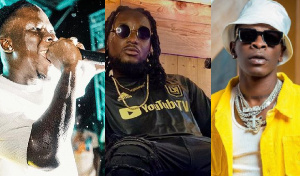 Epixode cites Shatta Wale and Stonebwoy ban is a blessing

Prolific Ghanaian Dancehall musician Theophilus Nii Arday Otoo, popularly known as Epixode, says Shatta Wale and Stonebwoy’s ban from the Vodafone Ghana Music Awards (VGMA), even though unpleasant, was to his advantage at the end.

According to Epixode, the VGMA ban paved way for him to emerge as the Best Reggae/Dancehall Artiste in the 2021 VGMA’s for the first time.

In an interview on TV3 New Day, Epixode further stated that the ban encouraged upcoming artists to work harder and gain recognition in the award scheme.

“No disrespect to none of them. I only feel like awards are to encourage artists,” he added.

It can be recounted that Shatta Wale and Stonebwoy were banned indefinitely from participating in the VGMA’s after a scuffle occurred between them at the 2019 edition.

The VGMA Board, however, lifted the ban through a press release dated February 12, 2021.

Speaking on his much-anticipated banger titled ‘Faya’, which features musical duo Keche, the reigning Reggae Dancehall Artiste of the Year revealed that the music was unplanned. However, it is already making waves.

“This song wasn’t planned. Andrew called me that he has a Reggae song, and he wants me to give him a verse. So I delivered. It was supposed to be a whole day session, but within a few hours, I was done with the verse.

“We didn’t plan to write the song. They have been very supportive in promoting the song and making sure the song is making waves,” he stated.

Epixode further revealed that he has three albums yet to be released, which features some amazing artists he did not want to disclose.

He appreciated the support from fans and implored them to support his new release as well.