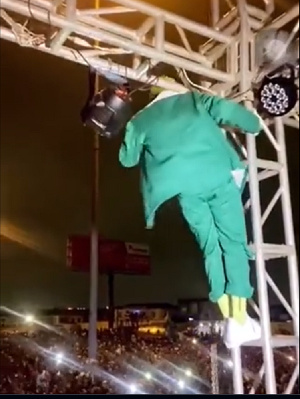 Shatta Wale turns the heat up in Kumasi with performance

Fans react to Shatta Wale climbing a scaffold during a performance

Dancehall artiste, Shatta Wale amazed fans over the weekend as he performed at the Kumasi Sports Stadium.

At the Baba Yara Sports Stadium, he jumped off the stage and climbed a scaffold as though the stage was too low for him.

In the video that has gone viral, social media user have described him as ‘Spiderman’.

A fan who shared the post on Twitter with the caption “God abeg hold Shatta Wale for me wai. More than Spider-Man Eeii”

The concert dubbed ‘Taabea Taacum Concert’ at the Baba Yara Sports Stadium was filled to capacity as rapper Medikal was present with Shatta Wale to perform.

The concert was by far the wildest seen this year from the dancehall artiste.

Upon his arrival in Kumasi, the SM boss was given an outstanding welcome by a group of motorists who escorted him to the event where he performed with ‘his blood’, Medikal, as he calls him.