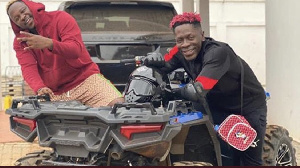 Fans chase SUV’s of Shatta Wale and Medikal in Kumasi

Shatta and Medikal given a resounding welcome in Kumasi

Shatta Wale and Medikal stormed the Kumasi PZ plaza ahead of the farmers day celebration concert at the Baba Yara Sports Stadium.

The artistes drove in separate SUV cars as crowds closed in to greet them in the market area while they stretched forth their hands for quick slaps in the palms and loud cheers.

The two award-winning performers arrived in the Garden City ahead of their first-ever concert since their release from prison to headline the ‘Taabea Taacum concert’ at the Kumasi Heroes Park, Baba Yara Sports Stadium.

Fans didn’t anticipate Shatta Wale and Medikal to perform ahead of their show happening in December but guess they were wrong as the two accepted to headline the Taabea Taacum Concert.