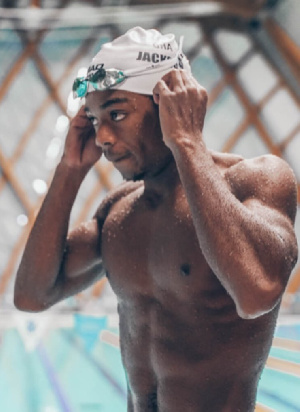 Abeiku Jackson has revealed how he combines education and sports

Jackson has been to 2 Olympic tournaments

Ghanaian Olympic swimmer, Abeiku Jackson, has opened up about some highlights in his career as an athlete.

Abeiku Jackson has been swimming competitively since he was 4-years-old and has grown to become a household name when it comes to the water sport in Ghana.

The 21-year-old inked his name into history when he represented Ghana at the 2014 Olympic Games in Rio where he performed brilliantly in the heats.

In 2021, Jackson qualified to the Olympic Games again and this time he improved on his personal best in the previous edition.

Speaking in an interview, Abeiku Jackson revealed that his journey began at the Soul Clinic International School and highlighted the importance of friendship.

“I think swimming should be a life insurance policy”, Abeiku said during the chat.

He also discussed having to prepare for his first Olympic Games and his international general certification exam, simultaneously.

According to him, he finds combing his books and sports is very tough but manages to find time to study and practice.

Abeiku Jackson is the first Ghanaian Swimmer to fly the flag at the Olympics and an African youth record holder.