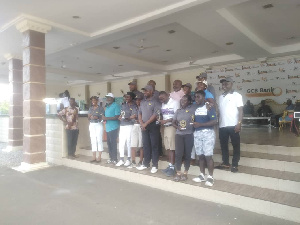 The award winners with their prizes

Eric Ofosuhene walked home with the biggest prize as the winner of the GCB Bank Classic Golf competition held at the Bok Nam Kim Golf Club on Saturday, December 4, 2021.

Ofosuhene emerged winner of the competition which had 84 male golfers after hitting a net score of 66 with a handicap of 11 and a gross of 77.

Donald Obilor gave Ofosuhene a run for his money but his effort could only land him a second placed finish with a net of 66, 10 handicap and a gross of 76.

Occupying the third position is 15-year-old Rickie Hurtubise who lost by a stroke after polling 67 net and a gross of 74.

In the female category, Awura Abena Asante came tops with a net score of 61, 28 handicap and 89 gross.

The longest drive award for male and female went to Nana Egyir of GCB and Floria Hurtubise respectively.

Speaking are the event, the Deputy Managing Director (Operations) at GCB Bank, Emmanuel Lamptey disclosed that the competition had a record 107 participants.

He hailed the participants for competing fairly and described the events as hugely successful one.

He reiterated the commitment of his bank to supporting the development of sports in the country and assured of future events.

He said the bank is sponsoring a similar event at the Royal Golf Club, Kumasi this weekend as well as throw a huge financial support behind the maiden First Ladies Cup competition slated for Accra this week.

He continued: “One of our corporate social responsibilities is to support golfing in Ghana and also lesser-known sports in general. “You will see in the coming few weeks we will be supporting ladies football in Ghana and tennis.”