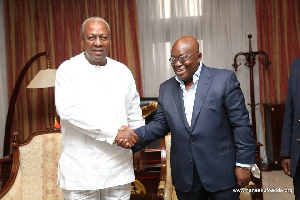 Senior citizen and economist, Kwame Pianim has appealed to the National House of Chiefs to convene a meeting between President Nana Addo Dankwa Akufo-Addo and his predecessor John Dramani Mahama.

Pianim said the House of Chiefs needed to use its position as: “owners of this land” to arrange the said meeting.

He believes that the meeting will help both political leaders to find a common ground for the current parliamentary set to work with the Executive towards national development.

The Daily Graphic quoted him as saying the meeting must also “find ways and means to calm their supporters and bring civility to our political discourse.”

Pianim spoke to the Daily Graphic in a wide-ranging interview on current ongoings in the country.

He particularly spoke about the need for a political bargain between the ruling New Patriotic Party and the National Democratic Congress in Parliament. It follows recent chaotic scenes in the House over the rejection and or approval of the 2022 budget.

“MPs should focus on serious national issues and help protect the Fourth Republic. If you push politics into the streets, you will be the major losers and set back national development for decades.

“Focus on deliberating on the budget and make the measures promote the national interest and the welfare of the poor in your constituencies,” he stressed.