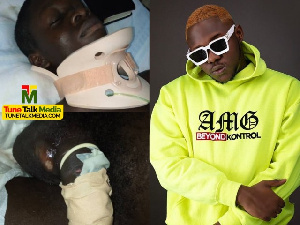 Frank Arhin, one of the fans who were injured at Medikal’s concert held at Sowutuom last year December is almost dying out after he was abandoned by the rapper.

The concert which was dubbed ‘Welcome to Sowutuom’ witnessed spectacular performances from acts such as Shatta Wale, DJ Switch, King Promise, Joey B among others at Kwashieman School Park, a suburb of Accra.

Some fans that were standing close to the stage collapsed after large speakers fell on them.

The speakers fell when Shatta Wale was on stage performing some of his popular tunes.

According to Frank Arhin who is in a critical condition Korle Bu Hospital and one of the victims, he has been through a lot and has been deliberately ignored by the organizers of the event and management of the Rapper.

He wept that the hospital bills have not been settled till date and that he even finds it difficult to feed the poor boy.

The boy whose parents have passed on and is really in need said he would be grateful if the public comes to his aid because he’s paralyzed as a result of the accident.

“I have been at Korle Bu Hospital for the past 4 months and I have no one to pay my bills” – he said.

GhanaWeb is not responsible for the reportage or opinions of contributors published on the website. Read our disclaimer.