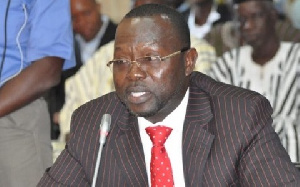 The Member of Parliament (MP) for Bolga East Constituency Dr. Dominic Ayine, says he would have gone for a total lockdown of the country if he were to be the president of the republic.

The lawyer said the partial lockdown announced by the president will not prevent movements from the hotspots to other regions such as the north.

He told parliamentary press corps that he would have gone for a total lockdown giving the nature of the crisis.

He was also not happy at the exemptions given questioning whether lawyers and their clients would have the opportunity to appear before the courts.

He also reiterated that the imposition bill passed was a bit problematic.

He said he would continue to emphasise that the president could have come under Article 31 of the Constitution declaring a state of emergency and have parliament determine the scope and content so they are able to take into account if he should go against it.

He accused the Majority of pushing the bill to enact exceptions to the fundamental rights in order to suspend the freedoms and rights of citizens.

This he described as “palpable unconstitutional”.

Per what was done, he lamented that the president cannot be held into account should he be excessive in exercising his powers unless through court action.

He further described the situation as scary in a democratic country like Ghana.

He believes people are in the position to flout the restrictions or orders. However, he advised the public to obey based on common sense because we are in a public health crisis and a state of emergency.

Ghanaians he added owe themselves and neighbours a duty to lockdown and prevent the spread of the deadly virus.

The Minority in Parliament had described as “not useful” the Imposition of Restriction Bill 2020 which government says will help it deal with the spread of the coronavirus.

The legislation was laid in the House under a certificate of emergency in accordance with Article 21 (4) (c) and (d) of the Constitution.

After the third reading of the Bill, a voice count favoured its passage into law.

The bill essentially allows the President to impose restrictions reasonably required in the interest of defence, public safety, public health or the running of essential services.

It also allows the President to impose restrictions on movement or residence within Ghana of any persons.

The President could also restrict the freedom of entry into Ghana.

The bill additionally says the President could impose restrictions “for the purpose of safeguarding the people of Ghana against teaching or propagation of a doctrine which exhibits or encourages disrespect for the nationhood of Ghana, the national symbols and emblems, or incites hatred against other community members.”

It says the President can impose such restrictions through an executive order for a period not exceeding three months. If the restriction has to remain beyond that, the Executive order has to be renewed.

Anyone who flouts the restriction commits an offence and is liable on summary conviction to a fine of not less than 1000 penalty units and not more than 5000 penalty units.

Each unit is GHS12, putting the range of fine at between GHS12,000 and GHS60,000. The convict could also be liable to a prison term of not less than three months and not more than six months or both a fine and imprisonment.