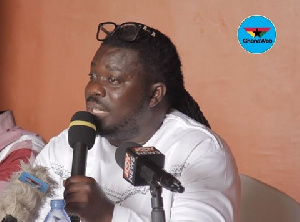 Entertainment pundit, Mr Benjamin Oduro Arhin Jnr also known as Bnoskka has said Former MUSIGA President, Bice Osei Kufour [Obour] should have settled all allegations made against him before announcing his intention to contest as a parliamentary aspirant.

Speaking on Kasapa FM’s Entertainment Show with host, Eddie Ray, he elaborated on the fact that Obour’s regime as the MUSIGA president has been impressive.

However, he believes that if only Bice Osei Kuffuor had dealt with issues and accusations leveled against him by people, it would have been the best for him to contest as a parliamentary aspirant of the New Patriotic Party (NPP) in the Asante Akyem South Constituency.

“If Obour knew those accusations could affect him as Lee Man-hee of South Korea, he would have come to clear himself.” Bnoskka.

The Creative Arts Business and Intellectual property Consultant also referred to John Dumelo’s case where he had to come out and apologize to the citizens for passing a comment on a University Graduate of the Kwame Nkrumah University Of Science and Technology selling bread because of Ghana’s hard economy.

Nonetheless, he shares the interest that when people decide to do something because of their own decisions, they should rather look at the end results in the near future.