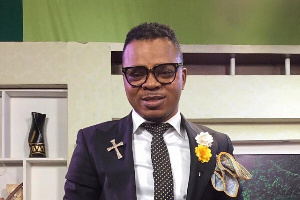 Angel Daniel Obinim has responded to a video circulating on social media suggesting he was jamming to King Promise’s “Bra” with his side chick.

There was a video circulating on social media on March 26. In the video which was sighted by MyNewsGh.com and reported by several news portals, Angel was seen dancing with a lady who was allegedly his side chick.

But reacting to the video, the founder of International God’s Way Church, said it was rather his daughter out of wedlock he was dancing with.

Obinim mentioned that the video was taken out of his daughter’s WhatsApp status and used against him for mischief purposes.

The “Angel” of our time was shocked that people peddle falsehood adding that “so parents cannot dance with their kids anymore”.