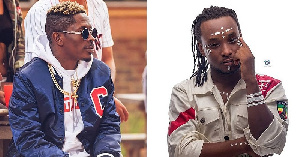 Ghanaian musician Epixode has described claims by Shatta Wale that he has been sleeping in recording studios for many years as “absolute falsehood”.

Shatta Wale is reported to have said on Onua FM in Accra that Epixode has no place to lay his head let alone owning a house.

Shatta Wale, who described Epixode as his protégée, further questioned whether he is of sound mind.

But in a swift response, Epixode described Shatta Wale as shallow-minded and a pathological liar, and urged the public to disregard his comments.

“I never told him I sleep in a recording studio, the thing is Shatta and I usually speak on phone at midnight and I have a studio at my father’s house which is situated at Dansoman.

“Everyone knows I spend most of my time at the studio so whenever he calls and he finds out I’m at the studio at midnight he thinks I sleeps there which is wrong.

“I’m disappointed he even disclosed confidential stuff about my pending contract on air which is totally out of place,” he added.