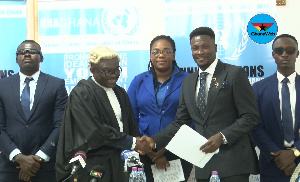 Celebrated Ghanaian striker, Asamoah Gyan, has been sworn in as the Goodwill Ambassador for United Nations Youth Association of Ghana.

The striker took an oath at the Foreign Affairs Ministry in Accra on Thursday to become a role model for the youth of the country.

The former Sunderland forward was chosen for the position following the charitable deeds he has been doing in the past.

Last year, the player was enstooled as a local chief in Hohoe in the Volta Region of Ghana after he constructed a water system for the Francis Training College to help them access potable water.

Prior to that, the ‘Baby Jet’ also constructed an astroturf pitch for his alma mata, Accra Academy. In terms of charitable works, the former Al Ain striker is known for donating to the Dzorwulu Special School, Korle-Bu Cardio Center, a Youth center in Malawi and a tall list of others. Gyan has also extended his good deeds to the Black Queens, Dreams FC, Liberty Professionals among others.

Off the pitch, Gyan has also invested into a number of ventures which has created employment for the youth.

Speaking moments after the swearing-in, Asamoah Gyan said, “I’m surprised to be chosen to serve the youth of Ghana because looking back at my career and the things I have been through I say my fans are the youth. The name Baby Jet signifies something for the youth, people even name their children with that name.”

He added, “My team and I thank the UN Youth Association and we hope that everything becomes successful in the future.”

The striker was sworn in along with 3 other personalities into the for United Nations Youth Association of Ghana.